Cryptocurrencies are on the rise, with some digital coins reaching over $1 billion in value. Despite this surge of interest and skyrocketing prices, experts have repeatedly stated that cryptocurrencies should not be classified as a risk to the American economy. With many non-government organizations now offering crypto funds for investment purposes is it time to buy?

As of March 2018, there were 1,638 cryptocurrencies listed on CoinMarketCap. Today’s cryptocurrency boom has many investors questioning how they can protect themselves from the volatility and risk associated with these digital assets.

Cryptocurrencies have been in the news a lot lately and there is no denying that they are on many people’s minds. The United States has already taken action to regulate cryptocurrencies which could mean good news for long term cryptocurrency holders.

The “myths about cryptocurrency” is a new trend that has been growing. Some people have said that cryptocurrencies are not safe and will cause the American economy to collapse. This is not true, but it’s still important to read more about the topic before buying any cryptocurrency.

Officials from the United States Federal Reserve affirmed at least three rate rises and agreed to speed up the removal of the enormous monetary stimulus used to sustain the markets during the coronavirus outbreak. The Federal Reserve will gradually cut its bond purchases by $30 billion per month until they are completed early next year.

The FED decision drew the attention of crypto traders since tighter monetary policy would push the US dollar higher, which is considered negative for riskier assets priced in USD, such as cryptocurrency. BTC’s price has dropped 15% in the last week as investors fear an even more aggressive removal of the stimulus and quicker interest rate rises that will be revealed at the FED’s December meeting.

Chairman Powell of the Federal Reserve: Cryptocurrencies are not a threat to the American economy.

On Wednesday, Fed Chairman Powell said that cryptocurrency is not a “financial stability risk.” “If properly regulated, stablecoins may absolutely be a helpful, efficient consumer-serving aspect of the financial system,” Powell added. “At the moment, they aren’t.” Powell also said that developing a national digital coin and regulated cryptocurrency market would take time.

Bitcoin is expected to rally to $60,000 in the near future, according to a Bexplus analyst.

On the 4H price chart, Bexplus head analyst Justin Kwok notes that the current price pattern seems to “repeat” that of late September: the identical 3-wave movement. The same hidden bearish divergence emerged on the RSI indicator. The MACD signal lines have also formed a “gold cross” and are heading up towards the 0 axis, indicating a bullish indication. In the next weeks, a possible rally to $60,000 will emerge. 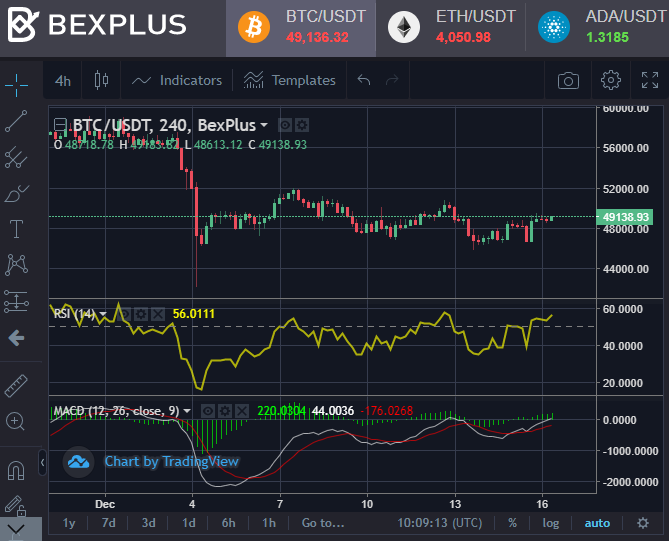 How Can You Make the Most of the BTC Boost?

BTC futures trading is a popular tool for traders who want to benefit from market swings. It allows investors to go long or short on the BTC price, making it beneficial in both up and down trends. When opposed to spot transactions, one of the reasons why so many traders choose BTC margin trading is because you can generally acquire larger leverage.

In Bexplus, you may trade BTC futures with a 100x leverage.

Bexplus is a reputable and professional company that offers everlasting contracts with 100x leveraged BTC, ETH, Doge, ADA, and XRP, among other cryptocurrencies. It is used by over 800,000 dealers from more than 200 nations and regions. Traders may enhance their exposure to price swings and transform what would otherwise be minor gains in spot trading into big profits by trading crypto futures contracts with 100x leverage in Bexplus.

Bexplus provides you with the following amazing services:

– Bitcoin wallet with a maximum yearly interest rate of 21%.

– A trading simulator with 10 BTC for free for traders to practice leverage trading.

— A well-designed and feature-rich app available on the App Store and Google Play.

Join Bexplus today to increase your income with a bonus of up to 10 BTC!

Cryptocurrencies do not pose a risk to the American economy. It’s time to buy?. Reference: how will cryptocurrency affect banks.

Why cryptocurrency is bad for the economy?

A: Cryptocurrency is bad for the economy because of its high volatility.

Is cryptocurrency a threat to the dollar?

A: It is possible that cryptocurrency could pose a threat to the dollar. However, it is unclear as of yet how this will turn out in the long run.

Is cryptocurrency good for the economy?

A: Cryptocurrency is good for the economy because it provides trust and stability to a market that would otherwise be prone to fraud or theft. However, there are some drawbacks of cryptocurrency like volatility which means certain people may not have enough money in their bank accounts at any given time but instead rely on cryptocurrencies as well.